I have been again to the .NET Open Space in Leipzig. This time with my colleague Oliver.

I have written a Review last year. I want to take the opportunity to write what has changed in teamaton since then:

Back to the Open Space of this year. I liked it. It was refreshing to see so many developer from the .NET, and talk to them. The first day was not as interesting regarding the sessions as the second day. The atmosphere was good – there were more than 150 people, many from Berlin, where our office is. Everyone could kegel, get a massage, and participate at different lotteries.

Here are a few topics, where I joined the discussions.

I haven’t thought about message queues a lot. Yet, we do have an area of application for those: Sending emails from within a web application.

Why should one use MQs?

How does it work? One or more publishers push messages into a queue. There are one or more subscribers listening to the queue, and work off the messages. Publishers can push different tasks to different queues, which then are listened to by different subscribers. One can imagine a system of prioritization with this feature.

Tools: We discussed a small example with RabbitMQ (und EasyNetQ). We talked about the differences to MSMQ und NServericeBus. As it seems, RabbitMQ is more powerful (applicable to different platforms), but MSMQ is easier to understand for beginners.

As a takeaway I will try to promote more feedback meetings or retrospectives in our firm. We should compare more often our expectations and the reality and impediments. Many other firms organize estimation meetings, where they also define acceptance criteria – maybe we should do something like that, too. I want to look into Scrum, even though we are not enough people for this process, but there may be ideas we can apply to our little firm.

There were a few sessions to CQRS, because it was new to many of us, and very interesting. Command-Query Responsibility Segragation is an architecture pattern, has many different aspects which for themselves are already patterns. It is also found under the name of CQS (Command-query separation).

It is (for me) a totally different approach at saving data and retrieving it. There is much emphasis on the thought process and the domain model. The patterns starts with the user and his/her actions, not with data objects. These actions are translated into commands, which are processed and generate events. These events are basically incremental steps to changing the state of the database. They are saved in an append-only database, so they do not get lost. These events can then be used to update denormalized databases where the views are saved. That way you can get fast access to the data you want to display to the user. (See also the CQRS-Website from Gregory Young with a long introductory video, and an article byMartin Fowler.)

We looked at a small Example (quellcode), where you can see that it does not take much to apply this pattern

I hope that we at teamaton will try this architectural pattern out on a new coming project. I like it a lot, especially the focus from the beginning on a sophisticated domain structure.

At last a few smaller things I ran into at the Open Space:

Next year will be again a .NET Open Space in Leipzig: 20th and 21st of October 2012. Thanks for the Organization! 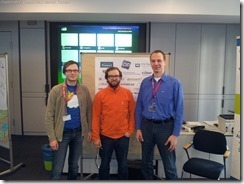