We had problems with one of our servers. The mirror was broken. I am talking about the Windows Server Software-RAID (it is a RAID 1, by the way). We had problems restarting the server – it just did not come up again. We had to boot from a “secondary plex”, which usually involved setting up a Lara Console for that server. (Yes, you can adjust in the msconfig which mirror the booting should use.)

I was afraid to do anything with the disks and volume, because I have never done something like that, and I thought I might do something which would crash the server, and leave the hard disks inaccessible. Finally I tackled the problem, and it was quite easy. First off, of course I backed up all the vital data to another server.

At Microsoft TechNet I found a good page describing what I had to do. We had the problem of “Failed Redundancy”. All I had to do was: In the properties-dialog of the volume click “Reactivate Volume”. It then took some time until the disks were synced, but eventually everything was in order again.

The first restart of the server did not work out properly. I do not know why. From the second on, everything was fine.

Hoping that your Disk Management always looks like this: 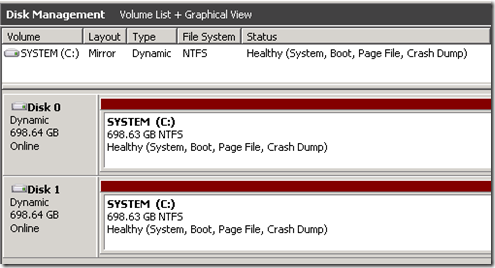